You may have missed it, and in case you did, the entire puppet regime put into power in Kiev by the USA has resigned, but there's a catch: no one really knows why, except that it seems clear that the IMF imposed "austerity" program was the ultimate catalyst. Here's a couple of articles, the first by Dr. Paul Craig Roberts, former Reagan administration treasury official:

And here's the link to Prof. Michael Chossudovsky's article:

Roberts summarizes the resignation and possible motivations behind it as follows:

"Today the Ukrainian government resigned. The prime minister Yatsenyuk, or “Yat” as (he is) affectionately called by Victoria Nuland who put Yat into office, resigned along with the entire Cabinet. The parliament refused to vote the harsh conditions demanded by the IMF. I am not sure what this means. Perhaps it is just a tactic to force the parliament to do as the IMF says. Or perhaps Yat, Washington’s stooge, has realized that IMF or no IMF, Ukraine’s economy is imploding and wants to get out of the blame.

"The point for now is that I checked the BBC, the New York Times, and CNN and there is not one word about the collapse of the government of Ukraine."

True enough, when Dr. Roberts posted his article, there wasn't a peep from the western lamestream media, as I also tried to find confirmation. Then Ms. D.O., a regular here, found this:

You'll notice that in the New York Times' version of the events, the focus is on the separatist fighting in the Donetsk region; there's nary a peep about the IMF austerity program. The only hint at the economic and financial reasons motivating the resignation occurs in the Times' statement here:

“'I declare my resignation in connection with the collapse of the coalition and blocking of government initiatives,' Mr. Yatsenyuk said after two major parties announced they were pulling their support, a step that allows President Petro O. Poroshenko to dissolve Parliament and call elections for the fall."

The "government initiatives"  in the Times' fluff "reporting," however, are made very clear by CHossudovsky:

"On July 24th, the Rada failed to support the government’s bill pertaining to the 2014 budget sequestration, which had been demanded by the IMF on behalf of Kiev’s external creditors. The disbursement by the IMF of the “Second Tranche” of a 17 billion dollar policy based loan was conditional upon the prior adoption of this legislation.

In other words, no vote, no IMF money; no IMF money, no money for the Ukrainian military fighting the separatists.

In Chossudovsky's report, he maintains that this man, Mr. Oleh Tyahnybok, whom Mr. Chossudovsky states is a Neo-Nazi, will be one of the power brokers in the formation of a new government. 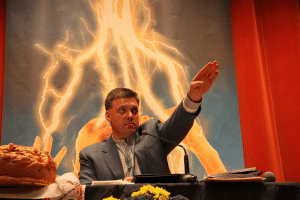 Then there's this admission from a Pentagon official:

US pulling out its Cold War-era plans over Ukraine conflict, top commander admits

So what "old contingency plans" might the US be "looking at" once again?

Well, as the article also avers, General Dempsey made the statement that Russia is pouring military forces into the eastern Ukraine, allegations repeated by State Department spokeswoman Marie Harf. The only trouble is, there's no proof; it's all based on classified intelligence sources and information, which, over course, "we are not at liberty to talk about":

Now, if you're like me, you're probably beginning to smell the old "weapons of mass destruction" story that was put out to justify the invasion of Iraq in 2003.

And that brings us to the high octane speculation of today, or rather, or tomorrow, because we'll have to wait till tomorrow to connect a few more dots...