THE GMO SCRAPBOOK: RUSSIA AND CHINA IN $10 BILLION AGRIBUSINESS DEAL

In last Thursday's News and Views from the Nefarium I commented about the significant developments taking place between Saudi Arabia and the Russian Federation. Both countries, as I implied in my remarks, are embarking on aggressive and far-reaching diplomatic initiatives that - just by being broached - can fundamental alter the current diplomatic, geopoliical international order. As I've suggested in a few recent blogs, Saudi Arabia has been undergoing some internal shifts of power, succession struggles, and so on, for a number of years, and these overtures toward Russia are significant enough to suggest either that the kingdom has stabilized its internal affairs enough to undertake such overtures, or that it feels increasingly threatened by external developments, or both. One possible way to read it, from our amateurs' sidelines, is that Saudi Arabia is looking at the developments of China's "New Silk Road" project, and wants in on the game, and is not going to get in that game if it continues to be perceived (note the word) as a close ally of the West. 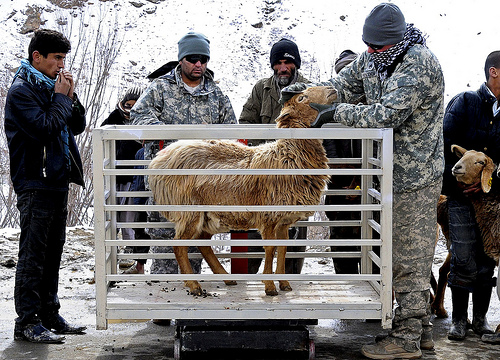 Photo by The U.S. Army

For Russia's part, as I also noted in Thursday's News and Views, it is playing an increasing role - and trying to position itself - as the stabilizing and sympathetic element in great power involvement in the Middle East after Washington's abysmal failures of the last decade. Drones and bombs and covert ops aren't working, and the results are there for all to see, as powerful US allies continue not only to question Washington's course, but to increase the frequency of their questions. Russia along with France and Germany was a major factor in helping to negotiate the recent nuclear deal with Iran, and no significant cooling of relations between Moscow and Tehran appear to be in the cards for the foreseeable future.

Which makes the recent Riyadh overtures to Moscow all the more interesting, since Tehran is not - to say the least - high on the kingdom's list of favorite countries. And one can only assume that the Saudis do not undertake such sweeping overtures to Moscow without quietly feeling out the opinions of Tel Aviv either.

All of this makes this bit of information, shared by "Mr. S", all the more intriguing:

This development has profound long term implications on any number of grounds, but let's consider just a few of them. Siberia, for one thing, has been consistently, throughout its long history of incorporation into the Russian empire since the days of "the collection of the Russian lands" and the collapse of Mongol influence in the country, the most under-developed region of the huge country, in no small part because of its harsh climate. But imagine the transformation of that great wilderness into a rich agricultural region through the application of technologies and capital investments. This, in short, is what we're looking at: Russian development of the region as an agricultural region aided by Chinese capital. The Chinese, in return, gain a measure of relief to one of their most consistent and persistent problems: how to feed such a large population?

One key issue here, and one to watch, is the GMO issue, which is why I've put this article in our "GMO scrapbook" file, for Russia, as we have pointed out on this site, has increasingly called into question both the wisdom of, and science behind, GMOs, while China, on the other hand, has been a major investor into the development of those technologies. Hence the question occurs: will Chinese money buy an influence over and moderation of the Russian government's policies, or conversely, will Russia continue to insist on increasing yield and production in the region through other technological means? For the moment, I suspect that Russia will have the upper hand in this decision(after all, it's their land that's being developed). This in turn could have a major effect on how the GMO issue increasingly becomes a major issue of international politics.

But there's another key issue that will inevitably be involved in these plans, and that, quite simply, is Japan. In the wake of the ongoing Fukushima disaster, the Japanese food supply, like its energy supplies, is increasingly dependent on foreign sources. Development of the Russian far east as a major agricultural zone would inevitably suck Japan into the picture, as the region would be a nearby and ready-to-hand supply of food imports for the country, which thus far has relied heavily on American, Canadian, and Australian  food imports. The nearness of the region would dramatically cut shipping costs. And for Russia, Japan holds the geopolitical key to preventing the undo growth of Chinese influence within the region.

In short, all this means that these developments are again, onces to watch, for they contain, quite literally, the seeds of long term fundamental alteration of the international gepolitical stage.