If you've been following the metldown of disturbing events in the Middle East and the Ukraine, not to mention the growing refugee crisis in Europe, you'll also have been noticing the propaganda wars have been heating up, a process, really, that began in earnest during the whole Ukrainian mess, if not before.  But since the Russian intervention in Syria, things are now going full tilt it seems. Western media is predictably highlighting Russian air strikes and civilian  casualties (when the west does it, it's nothing but "collateral damage," of course). But now there's these disturbing developments, shared courtesy of Mr. S.D., a regular here: 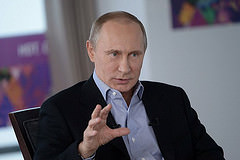 Whether or not this is true will require further corroboration, but then there is this disturbing development, also shared by Mr. S.D, and some others here:

You'll recall that we have blogged on this site about the possible use of such weapons in Syria and Yemen. Indeed, there have been YouTube videos from both countries, taken and uploaded by locals, that indicate either the use of tactical nuclear weapons, or thermobaric bombs, or possibly, even some type of new explosive weapon. Additionally, since the mess in the Ukraine grew into the current problems in the Donbass, there have been similar videos taken by locals there, and uploaded on YouTube. At the time, I expressed my puzzlement, and continue to do so. Thermobaric bombs are technological devices in the extreme, and only a few nations on the earth can actually make them, and they are, as one might guess, the "usual names": the USA, Russia, the European powers, China, and possibly India and a few others. One can rule out, of course, Chinese deployments of the devices to the Ukraine. Leaving the question of who might be using them in the eastern Ukraine?

At the time I first considered this subject, I was hard pressed to find a good reason why any country with an interest in the Ukrainian mess would deploy, much less use, them. They can be considered to be weapons of mass destruction, just a step below nuclear weapons, and hence, a considerable escalation, and a considerable cost in world opinion for doing so.. But as the above Daily Mail article suggests, a Russian thermobaric system has been detected, and, according to the article, from a relatively reliable source:

The Organization for Security and Co-operation in Europe - which is monitoring a ceasefire in eastern Ukraine - reports its monitors have seen a mobile TOS-1 Buratino system for the first time.

The Buratino features thermobaric warheads which spread a flammable liquid around a target and then ignite it. It can destroy several city blocks in one strike, causing indiscriminate damage.

The interesting thing here is that there is no substantiation of what is, to be sure, a significant and dangerous allegation. And in the highly charged atmosphere in Eastern Europe, the Ukraine, and the Middle East, such evidence would seem to be required. But additionally, there are those YouTube videos of enormous explosions in the eastern Ukraine, and ongoing Western charges of the presence of Russian military in the Donbass, and Russian denials of it. If, indeed, it has been the West covertly using such weapons there, then the intention of the discovery is clear: blame Russia. If, conversely, it has been the Russians supplying the devices to the Donbass, then again, the discovery is clear though the meaning changes: Russia is to blame. Or, perhaps, there is a third party trying to ratchet up East-West tensions.

My point? With allegations like this, the proof is in the proof, and as yet, there is none. And in the game of propaganda wars, there likely isn't going to be.