YOU TELL ME: MORE DEBRIS FROM MH 370 FOUND TWO YEARS AFTER THE EVENT?

I can't help it, but I am just skeptical of the whole Malaysia Air flight 370 disappearance, and have been since the story broke just a little under two years ago. And every now and then, as we've seen since it's disappearance, there's a story about debris being found thousands of miles away from where it was supposed to have crashed, or there's a story of people or debris found in other places, all of which - I can't help it - makes me think that someone might be trying awfully hard both to (1) keep the story alive and (2) keep everyone looking in the wrong direction, or at the wrong thing. I can't help it, but that's my intuition. Nothing less, and nothing more.

So, as we approach the second anniversary of its disappearance, once again there is more debris in the headlines, as this article shared by Mr. C.S. shows:

As noted, this most recent find appears to be that of a horizontal stabilizer:

Debris that washed up in Mozambique has been tentatively identified as a part from the same type of aircraft as the missing Malaysia Airlines Flight 370, a U.S. official said Wednesday.

Photos of the debris discovered over the weekend appear to show the fixed leading edge of the right-hand tail section of a Boeing 777, said the official, who spoke on condition of anonymity because he wasn't authorized to speak publicly. MH370, which disappeared two years ago with 239 people aboard, is the only known missing 777.

People who have handled the part, called a horizontal stabilizer, say it appears to be made of fibreglass composite on the outside, with aluminum honeycombing on the inside, the official said.

After the usual pro forma warnings against wild speculations - which we'll get to in a moment - the article then reviews the MH 370 saga:

Flight 370 disappeared on March 8, 2014, while flying from Kuala Lumpur to Beijing with 239 people on board. Radar data show the plane turned sharply around as it approached Vietnamese airspace, and then flew back across the Malay Peninsula until contact was lost off the coast of Thailand.

Authorities determined that the jetliner continued on a straight path across the Indian Ocean, leading them to believe that the plane flew on autopilot for hours before running out of fuel and crashing into the water.

Despite an exhaustive search of the ocean west of Australia, where the plane is believed to have crashed, the only confirmed trace of the aircraft has been a wing part known as flaperon that washed ashore last July on the French island of Reunion off the east coast of Africa — about 2,300 miles from the current search area.

Nothing of the passengers, their luggage or even things designed to float, such as life-jackets, has been discovered despite the largest and most expensive search in aviation history.

In other words, we're left with as many questions as we began with, and on the "official narrative's" view, the principal question of why the plane turned, and then flew south until it ran out of fuel and crashed, remains unanswered. Assuming this debris is from Flight 370, why would any pilot, hijacker, or what have you, do this, and then not make a statement about it? Was the plane commandeered remotely, and then flown until it crashed? If so, why?(And yes, I know about all the technicians on board, the Rothschild patent theory, and all of that, so no need to write and comment about it). Or is debris being "conveniently found" on the anniversary date, to deflect attention from the possibility that no one know anything about the the loss of flight 370. Is not the timing of this find in itself a little sispicious? 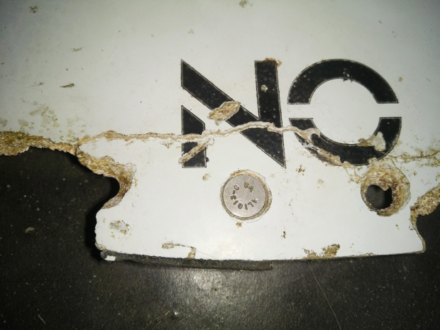 Now, what I know about airplane parts you can write on the back of a postage stamp, but something about this is unsettling to me, so perhaps all those airplane experts out there can write in and tell me to relax and remain calm. But until they do, we're being told thesse are a pieces of a horizontal stablizer, so I'm noticing what appears to be two relatively nicely symmetrically round holes underneath the word "NO" boldly stenciled on the piece, and between the two holes(one of which seems to be partial due to a broken off piece), is what appears to be a "fastener" of some sort, with what might be a part number stamped on it. This suggests that what created the holes might have been these "fasteners" popping loose or out. Above these holes, there appears to be a fracture of some sort, which looks like a stress fracture. Bottom line here, it appears that this piece has been subjected to some kind of stress; the only question is, of what kind, and when? Stress in the air? Stress due to impact? Now, obviously, I could be completely wrong. I know nothing about airplane parts, materials science, or any of the things that might dispell my unease in looking at this picture.