AT THE END OF THE TWIG: ARE THERE LIMITS TO ENTANGLEMENT? IS ...

As I indicated yesterday, this has been a very strange week for me, for people have sent many articles detailing recent discoveries in technology and science, and as might be expected, many of them come from the wild and weird world of quantum mechanics, which seems to grow weirder by the week (as if it wasn't weird enough already). Mr. J.K., Mr. V.T., and Mr. A. and a few others sent the following three articles:

Now, as one might expect, I'm going to crawl way out onto the end of the twig of high octane speculation here, where the weight of the speculation far exceeds the ability of the twig to support it. I can't help it; I'm a hack from South Dakota, and it's what hacks from South Dakota do. Besides, I'm also a Capricorn, and crawling way out onto the end of tree branches is also what goats do: 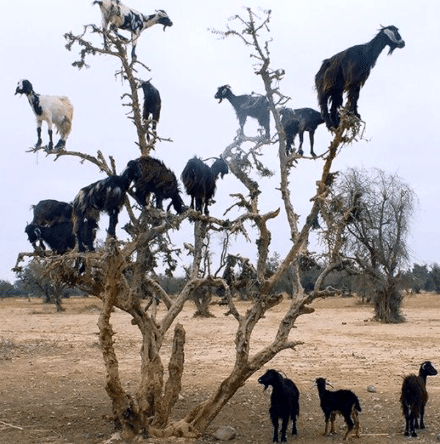 So, with that huge caveat in mind, there are a few statements in these articles that have me wondering. Consider this statement, when scientists subjected entangled particles to micro-gravitational, and then hyper-gravitational, acceleration:

"Our results show that quantum entanglement is unaffected by non-inertial motion to within the resolution of our test-system," the researchers conclude.

"This represents the first experimental effort exposing a genuine quantum system to milli-g and hyper-g, and extends the experimental regime in which quantum effects can be said to exist in harmony with relativity."

Consulting my Scientismese to Hack English dictionary, this translated to my simple mind as: "entanglement is not affected by inertial systems", or, "entanglement is not affected by gravity." Now, granted, the scientists conducting this odd, but very important, experiment, are not saying that. What they want to do is scale it up, and see if in fact there is some limit or "boundary condition" where under extreme gravitation entanglement might be affected or perhaps broken. Would it break, for example, in the extreme conditions of a black hole? Or, conversely, would the conditions in a black hole actually be the matrix for a kind of "hyper-entanglement"? I suspect (here comes that standing on the end of the twig part) that no such boundary condition will be found, or, that if it is, under certain inertial or gravitational conditions, entanglement might actually be enhanced, and that as such, entanglement (which, let us remember, is the entanglement of information) might be a clue, perhaps, to anti-gravity or contrabary.

Which brings me to the second article, and these ideas:

New calculations suggest space-time is wildly fluctuating, swinging back and forth between expansion and contraction at a scale ‘billions and billions’ times smaller than an electron.

The researchers from the University of British Columbia suggest there is a huge density of vacuum energy in the universe, as predicted by some – but, in their calculations, oscillations between expansion and contraction cause it to nearly cancel itself out.

But, it doesn’t, and instead gives rise to a tiny net effect that slowly causes the universe to expand at an accelerating rate, they say.

Again, to my simple hack-goat-from-South-Dakota-on-the-end-of-the-twig mind, this sounds a bit like what we've heard before: the lattice of space-time is not a static phenonemon: it appears to be that way but upon analysis, those "nodes" in the lattice result from a kind of zero-summing at the node, but with a slight residual leading to a translation, and as a result of that, there is a slight asymmetry driving the expansion of the universe. If that even more wild and woolly speculation is true, then connect it with the first phenomenon: manipulation of that contraction and rarefaction might also be a clue to the engineering of that lattice directly (and note, a contraction or compression and rarefaction such as the authors are speaking is a longitudinal wave form... and who does that sound like?).

Then we have the following statements from the third article:

Theoretical physicists have long proposed that such a form of communication would be possible, but now, for the first time, researchers have been able to experimentally achieve it - transferring a black and white bitmap image from one location to another without sending any physical particles.

If that sounds a little too out-there for you, don't worry, this is quantum mechanics, after all. It's meant to be complicated. But once you break it down, counterfactual quantum communication actually isn't as bizarre as it sounds.

First up, let's talk about how this differs from regular quantum communication, also known as quantum teleportation, because isn't that also a form of particle-less information transfer?

Well, not quite. Regular quantum teleportation is based on the principle of entanglement - two particles that become inextricably linked so that whatever happens to one will automatically affect the other, no matter how far apart they are.

Direct counterfactual quantum communication on the other hands relies on something other than quantum entanglement. Instead, it uses a phenomenon called the quantum Zeno effect.

In the quantum world, whenever you look at a system, or measure it, the system changes. And in this case, unstable particles can never decay while they're being measured (just like the proverbial watched kettle that will never boil), so the quantum Zeno effect creates a system that's effectively frozen with a very high probability.

Now, putting all this in Hack-ese again, one simply freezes the system by freezing the observation of it in a certain state. Granted, all this is at a quantum, sub-atomic particle level. But it doesn't take much imagination to figure out that someone, somewhere, will want to test the whole idea by "scaling it up" to "see what happens", or, in this case, what doesn't happen. While all the focus of the experiment is on particle-less communication, I therefore cannot help but wonder the extent to which the whole thing might be tailored to the engineering of micro-timelines and "reality engineering." (And, for those willing to crawl way out on to the end of this twig with me, I cannot help but wonder if the original Zeno paradox itself might be a legacy phenomenon of precisely this type of physics-observer-based thinking.... yea, I know, I've lost it. That's too much of a whopper. But still... I can't help but think of Plato and his "mathematicals".)

Putting all this together, what it boils down to is that these experiments and ideas have truly cosmic implications, that mankind is taking the first faltering steps into a cosmological engineering capability.  For now, the capability is small... but... if they can be "scaled up..."