This bit of information was passed along by Mr. T.M., and when I read it, initially I was disinclined to blog about it. But the more I thought about it, the more Mr. T.M.'s potential reasons for passing it along became apparent. The figure of Mr. Elon Musk is failry well known to regular readers of this site, being the founder of the Tesla car company and also of the private space corporation, Space X, which has already conducted a number of commercial launches for various clients. But Mr. Musk is also into boring (note, I did not say was a boring person, but into boring, i.e., deep underground large scale tunneling):

Now if you've been "connecting dots", then today's high octane speculation may interest you, because this is what caught my eye:

The all-electric digging machine does not need to have air vents for the emissions. The Prufrock Machine would only need a week to dig new exits from even China’s 2000 meter deep nuclear shelter cave system.

Now I know next to nothing about boring machines. The last and latest technology that I was made familiar with were nuclear plasma boring machines, which don't chew through rock and dirt, but rather, melt their way through it, leaving a hard glaze-ceramic-like surface which adds strength to the tunnel, and little to no debris to be carted away by conventional diamond-tipped drills in standard boring machines on conveyor belts. There has been much speculation that these plasma drilling machines have been used to carve out massive underground infrastructure in the American southwest. And in the early 1960s, the American military proposed using them on the Moon to bore underground habitations for human lunar bases. What's significant here is that there little to no information available on precisely how these types of "electric" boring machines are supposed to work; all we're told is that they're (1) fast by tunneling machine standards, and (2) require no ventilation. This suggests that the technology is being developed  - or as is more likely the case, has already been developed and we're just now hearing about it - by the military-industrial-breakway-complex for military purposes, a suggestion confirmed by the last line quoted above: "Conversely, underground facilities could be attacked by digging machines." Might the technology be some sort of super-energy weapon, converted to boring use? Maybe, I don't know. But the reason I suggest the possibility is that strange story from Guatemala a few years ago of a "sink hole" that suddenly opened up right in the middle of a street intersection. The available pictures of the "sink hole" at the time showed a nearly perfectly circular "hole" that seemed to drop into forever, not the typical crater-like concave configuration of a normal sink hole: 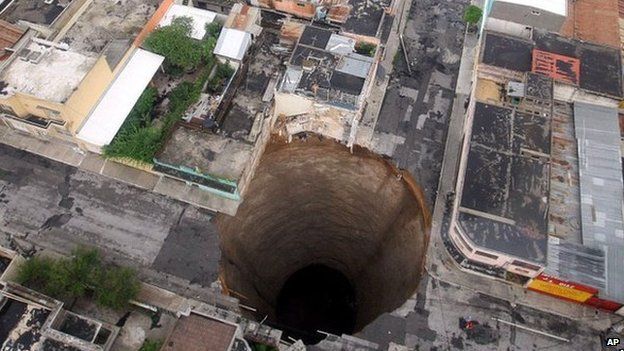 That picture is but one of many, and they're all equally strange, and perhaps, even faked. I do not know. In any case, the story is out there.

But none of this is really the focus of my high octane speculation today. Rather, it's that last sentence in the quotation. Here it is once again: "Conversely, underground facilities could be attacked by digging machines." Recently, we've seen the Trump administration nominate General Milley to be the Chairman of the Joint Chiefs of Staff. That's the same General Milley that spoke about future soldiers having to fight "hybrid armies" and "little green men." However, in the weeks prior to Milley's nomination, articles appeared indicating that the military was stepping up its training of soldiers to be able to fight "underground," and in the accompanying pictures of said articles, overwhelmingly soldiers were seen, not entering and fighting in caves and caverns and other such underground structures, but rather, in hallways, corridors, and tunnels. So the question becomes, who are they intending and training to fight underground? Iran? China? France? Germany? Russia? Countries with extensive underground bases? Rogue run-amok corporations with their own deep underground and black facilities? Or someone else?