Well, this is a bit of a "fun" story, or is it? I don't know, which is why I'm filing this one under the "you tell me" category. As Angela Merkel continues to shake both herself and her government apart, there's been some rather odd "symbolic goings on" in that country. A few days ago I blogged about the intriguing story that Germany has completely rebuilt the facade of the old kaiserlicher Staatsschloss on Unter den Linden in Berlin. The building had, as its name implies, been the official state residence of the Kaisers until Wilhelm II's abdication, but it was maintained until after the Second World War when the Communists - who else? - demolished it in an effort that would make Confederate statue destroyers envious, for in its place a monstrosity of a modernist architectural box was built. Well, the box itself has been demolished, and in its place has risen the facade of the old Staatsschloss. Of course, the inside of the building is not restored. Wilhelm II's tastes were decidedly "not modernist" and ran to the Baroque (oddly enough) both in art and music, and restoring the interior of the old Kaiserschloss would have been prohibitively expensive. But that, apparently, was not the point. Rather, as I pointed out in my blog about the story, the palace was rebuilt so that the post-war modernist constructions of Berlin would have to "compete" (their word, not mine) with something much more pleasant to look at. The implication of the remarks about the project was "expect more to come." But it is odd from a purely symbolic point of view, and we'll get back to that in a moment, for the rebuilding of the Staatsschloss in the old government quarter of Berlin could be taken as symbolic of much more than mere nostalgia.

As I also pointed out in that blog, a Germany navy drill team was videoed in Ottawa, Canada, performing in plain view (and for all to see) what appeared to be the old "parade step", which we know of course as the goosestep. I was floored, because it was the first time, as far as I could tell, than any unit of the post-reunification and post-war Bundeswehr had done that. Ever. Needless to say, I was deluged by a swarm of emails and angry comments that what  the drill team had done was not, really, the old "parade step". The comments basically amounted to the fact that the "kick" was not the full high-stepping kick of the Imperial Army, the inter-war Reichsheer, or the Wehrmacht; it was "off" by "several inches." The pettifoggery of the comments missed my main point, which was entirely symbolic; an "implicit taboo" had been broken, and something very much like the parade step had been done in full view for the attending Canadians to enjoy (which, apparently, they did). The symbolism of the act, viewed from the standpoint of rebuilding the old state imperial palace, was, I argued, not coincidental.

Now, don't get me wrong. I'm not one of those who thinks parade-stepping and carrying bell trees is a bad thing; it's a Prussian-German - indeed royal and imperial - military tradition, not a Nazi one. Not doing so is rather like the British military not using bagpipes; it's somehow just "off". It's the meaning of the return to these symbols and traditions, however, that is open to interpretation; just what does all this mean, particularly in a Europe overrun with "refugees" (thank you Angela Merkel), and virtually every country in Europe expressing some form of backlash against the multi-cultural dictats of the rootless cosmopolitans in Brussels.

So with that in mind, J.P. spotted this interesting article about what the old imperial and royal house of Prussia, the Von Hohenzollerns, have been up to lately:

Other than the eerie resemblance of H.R.H. Georg Friedrich Ferdinand to his great-great grandfather Kaiser Wilhelm II, the story itself is worth noting:

The Culture Ministry confirmed Friday that the Hohenzollern family has been negotiating with the federal government and the eastern states of Berlin and Brandenburg "for several years" — and apparently in secret.

According to Der Spiegel news magazine, the aristocrats are seeking to reclaim tens of thousands of valuable paintings, sculptures, coins, books and furniture, as well as the right to live at one of several grand estates.

But an agreement may be a long way off. Monika Grütters, the government's commissioner for culture, said, "the positions of the negotiating parties are still very far apart." (Boldface and italicized emphasis added)

Stop and ponder that in the context of the revival of other symbolisms and traditions, and imagine the significance of a return of the House of Hohenzollern to residence in any of its former estates. In effect, it appears as if the Hohenzollerns might be  requesting some sort of de facto recognition of the House's status as the royal house of a united Germany via a symbolic act, in this case precisely by returning to residence in one of the old royal and imperial estates. That may seem far-fetched, but the symbolism of the naval unit in Ottawa springs to mind here again: the unit began their drill by literally marching backwards to the tune of the old military march "Prussia's Glory", and then began its quasi-parade-step forward, as if to symbolize "we're moving back to our cultural tradition in order to move forward." Indeed, by seeking return of art works and furniture, one wonders if the covert goal is eventually to outfit that rebuilt Staatsschloss with some of its original appointments, and if in fact it's all in long-term preparation for a return of the Hohenzollerns to residence in that structure. Admittedly, that is very far-fetched. But in today's crazy world, why not? You heard it here first.

And now that I've crawled to the very end of the twig of high octane speculation, I might was well step off the twig altogether: in today's Europe, with Frenchmen, Dutch, Austrians, Poles, Hungarians, Danes, Swedes, Italians, Spaniards and British protesting the decay of their cultural and national identities at the hands of Mr. Globaloney and his technocratic rootless cosmopolitan lackeys, one wonders whether or not we're looking at a longing to return to the status quo ante Brussels, and indeed, status quo ante bellum prima. In Germany's case, it might even resolve some thorny outstanding issues of international law.

If that's the case, then are we looking at a pattern unfolding behind the scenes? Perhaps, but if so, then one has to watch not just the Hohenzollerns, but the Savoys, the Hapsburgs, the Wittelsbachs, the Bourbons, and - dare I say it? - the Bonapartes(and yes, they're still around, the current head of the House just conveniently happening to have a Bourbon mother). And lest I forget, while we're on this "return-to-the-royals" theme, don't forget that a few years ago the Russians were discussing a return of the Romanovs.

In any case, the symbolisms are there, and in Germany's case, we now have not just two symbolic tea leaves to read, but three, and there's an old adage here that might be appropriate to ponder: one is a fact, two is coincidence, and three begins to approach deliberateness. 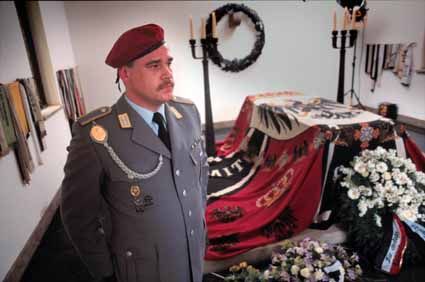 Bundeswehr Guard at Kaiser Wilhelm II's tomb in the Netherlands