The old saying that there were "giants in the earth" certainly appears to be true according to this story spotted by S.D. It caught my eye, for a very specific reason, but we'll get back to that. The story itself concerns the discovery of giant skeletons in Ecuador of people whose height was between 7 and 8 feet tall. The skeletons were exposed during heavy rains:

Now, what interests me here are these paragraphs:

According to a research team led by British anthropologist Russell Dement, strikingly tall skeletons uncovered in the Amazon region of Ecuador and Peru are undergoing examination in Germany. Will these remains prove that a race of tall people existed deep in the Amazon rainforest hundreds of years ago?

A half dozen human skeletons from the early 1400s to mid-1500s were confirmed to have been discovered, varying from 7 feet and 8 feet (213 to 243 centimeters) in height.

Dement told Cuenca Highlife: “We are very early in our research and I am only able to provide a general overview of what we have found. I don’t want to make claims based on speculation since our work is ongoing. Because of the size of the skeletons, this has both anthropological and medical implications.

In late 2013, Dement received word that a skeleton had been uncovered by a Shuar local, approximately 70 miles (112 kilometers) from Cuenca, in Loja Province, Ecuador. Dement traveled to the site and recovered the rib cage and skull of a female which had been exposed by flooding.

The bones were thought to date to 600 years ago. The rest of the skeleton was located and, once assembled, reportedly measured 7 feet and 4 inches (223.5 centimeters) in height.

Dement told Cuenca Highlife: “The skeletons show no signs of diseases such as the hormonal growth problems that are common in most cases of gigantism.

In all the skeletons, the joints seemed healthy and the lung cavity appeared large. One of the skeletons that we have dated was of a female who was about 60 when she died, much older than typical cases of gigantism.”

The article goes on from there into much more sensational claims, but before we address those, I want to consider an implication of the information cited above. Obviously, I am skeptical of articles of this sort. It's very easy in today's internet age to say just about anything, slap a couple of pictures together, and voila, one has a story about giants. But a few hundred years ago, before there were things like photoshop or even obsolete technologies like cameras and film, there are unusual statements from early European explorers, Christopher Columbus among them, that they encountered native American Indians among whom there were people that were "giants," and in some descriptions, these people were from 7 to 9 feet tall. The descriptions are odd in another respect, too, in that they do not indicate one way or another any health problems associated with them. Perhaps the lack of mention is simply due to not having been around them enough to observe any such problems, but then again, we don't know. In either case, the Ecuadorian "discovery," if true, might confirm that odd detail in early explorers' comments about having encountered "giants," i.e., extremely tall people, for according to the article, the bones "were thought to date to 600 years ago," the right time for the age of exploration.

The article concludes with something sensational:

Carlos Miguel Vaca Alvarado, of the parish of the town of Changaiminas, Ecuador, was all his life interested in archaeology, and this motivated him to discover a group of numerous giant human skeletons.

The bones were about 7 meters high and have been discovered in the mountains of the Amazon area. The seven fragments of the skeleton were carefully analyzed by many experts who reached the conclusion that those bones were part of a human skeleton seven times bigger than a modern human being.

Legends say that this region was known as the “cemetery of the gods”, sine in ancient times this region was inhabited by giants. Many experts affirm that this place is the lost city of the giants since many pyramids were discovered there, and their size reached 80 meters high and 80 meters wide.

It's not uncommon for giants to be associated with "the gods," for such stories span the planet and can be found on every continent (except Antarctica, and given the strangeness there, I'm not taking any bets). What one notices at this point of the article is the absence of details about the "many experts" who allegedly examined the 7-meter high human skeletal remains, whereas such details were forthcoming in the previous portion.

So, color me skeptical, for I'm about 50-50 on this one; the claims made for the first find are detailed and intriguing enough for me to think there may be a great deal to them, not the least of which is the time frame and coordination with textual accounts and stories of such people encountered by European explorers.

But oddly enough, there's a bit of highly weird corroboration of sorts even of the 7-meter-high story, and it comes from almost half a world away, in the form of Babylonian cylinder seals: 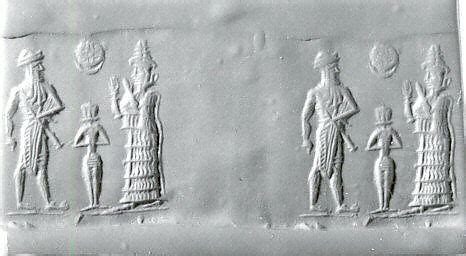 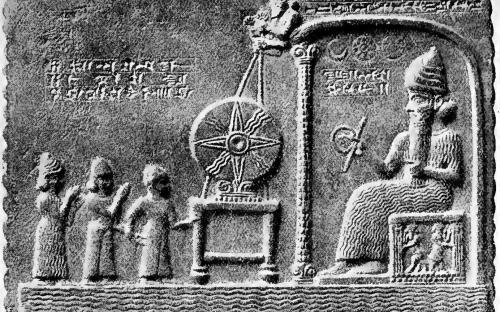 Academics often assume that such depictions are merely artistic metaphor, where the large humans are simply "figures of power" such as kings, and so on. But skeletons of giants changes the picture completely (not to coin a pun), and even kings, in some of those ancient texts, were said to be extraordinarily tall.