Before I get to today's blog, I want to thank everyone for putting up with my little absence over the July 4th holiday.  Also, I wanted to let everyone know once again that the short format vidchat for this coming Friday is already posted in the members' area, so please post questions and comments in the comments section there, one post per member, and please try to remember to keep them relatively short.

For quite some time I've been trying to warn people about the dangers of the move to digital currency, or the attempt to roll any particular crypto-currency over into a digital currency. A couple of years ago, however, the director of the Bank of England, Mark Carney, made statements to the effect that a digital currency could replace the US dollar as a reserve currency. As Catherine Fitts has pointed out, the trouble with this latest bunch of nonsense to be proposed by Mr. Globaloney is that it's a one-way mirror, allowing him to hide behind it and transact, while putting everyone else on full view; such a system, coupled with a social credit system means in effect that a "digital currency" is not a currency at all; it's a corporate coupon whose value can be adjusted on a case-to-case basis depending if one is a good little girl or boy. With all the concerns over the quackcines and their "safety" and experimental nature, imagine if such a system had already been in place: those questioning their efficacy and long-term effects might suddenly find the value of their digital currency halved, or worse, denied use of it altogether until they took the "jab".   Instantly adjustable "currency" we've seen before during the hyper-inflation of the Weimar republic; indeed it could be argued that if a currency dramatically loses value between the time a paycheck is deposited or cashed at a bank and a loaf of bread is bought at the grocery store, it's no longer a currency. Barter was the result.

There's another danger to the digital hopes of Mr Globaloney Central Bankster: EMP, electromagnetic pulse. Consider this story shared by E.G., and then I want to ask a very simple question:

Why Isn't The US Preparing For EMP War Like The Rest Of The World?

Now, having considered the article,  here's the question: when was the last time you heard the promoters of digital currencies, or of crypto-currencies (the two are not the same thing), talk about the dangers of EMP? Chances are, you haven't.  Or for that matter, when was the last time you visited the grocery store, paid cash, and encountered a clerk who knew how to count change back to you without the cash register telling him how much was owed? Chances are, you haven't.

While the two may seem unrelated questions, they're not in the context of the article. Indeed, I have to wonder in my high-octane-speculation sort of way, whether or not the drive to a "digital currency" is not really part of a plan of some sort to hit the West with a set-up for a massive fall: Stage One: get the West to go "all digital"; Stage Two: inject much of its population with nano-tech "quackcines" that have to be constantly "updated", and which are part of a bio-surveillance network; Stage three, integrate that into a social credit system with its digital "currency"; and then Stage four: hit the west with a massive EMP strike, shutting down its businesses, disrupting supply, emptying its "digital accounts", and causing massive loss of life as a result.

A few years ago I blogged about an unusual story in Russia: in response to government concerns about hacking, the Russian government was buying up all sorts of old typewriters for day-to-day communication.

In other words, they went "analogue."

Similarly, I've occasionally blogged about another phenomenon: the restoration of steam locomotives.  My speculation there? That Union Pacific and other railroads involved in this effort were not doing it out of some desire to spend lots of money to support "railroad heritage days," but rather that it was another "analogue work-around." The reason is simple: a diesel-electric locomotive would be affected by EMP. Steam locomotives, with their dials, levers, pulleys, and ...well... steam will not. No steam locomotives + EMP = freight stops. Steam locomotives + EMP = no problem, freight still moves. (See the following video, and note the one steam engine, and the many diesels, pulling similarly long freight trains: https://www.youtube.com/watch?v=XhgHrDbN4EU )

Again, they're backing up digital with analogue.

Which brings me to today's point: going all digital and removing physical media of exchange is a recipe not only for slavery but for suicide. It's a national security matter. Not for nothing do you never hear Mr. Globaloney Central Bankster never talking about thorny issues like hacking, EMP, and so on, because those - and particularly the latter - are the spanner in their works of central control, one-way mirrors, social credit systems, and so on. They do not want the analogue work around because it's an affront to their power and designs (not to mention, their stupidity).

So we need an analogue work-around, and thankfully, we already have one: cash, and we could have much more: bullion-coins. So start building more analogue redundancy into the system: use cash. In fact, Catherine Fitts and I discussed this issue in the last Solari wrap up, and she's starting a "Cash Friday" drive to get people to use cash in transactions, especially on Friday: 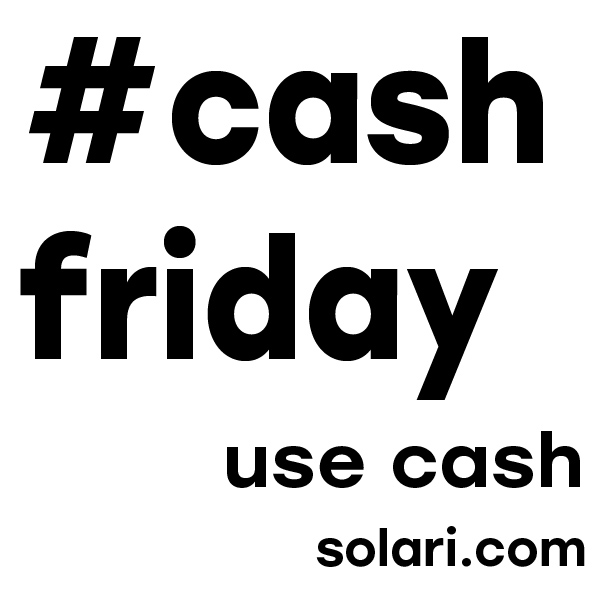 Funny thing about those paper currencies, those bullion coins, and those old-fashioned hand-crank cash registers: they still work and can't be hacked.

Now all we need to do is get the schools to teach kids how to count back change, and if they won't, fire them, and teach them ourselves...