This one was spotted by P.T., and it's in that rare "whopper-doozie" category of articles, so we'll get straight to it: China has just made all crypto-currencies illegal, according to this article from Zero Hedge: 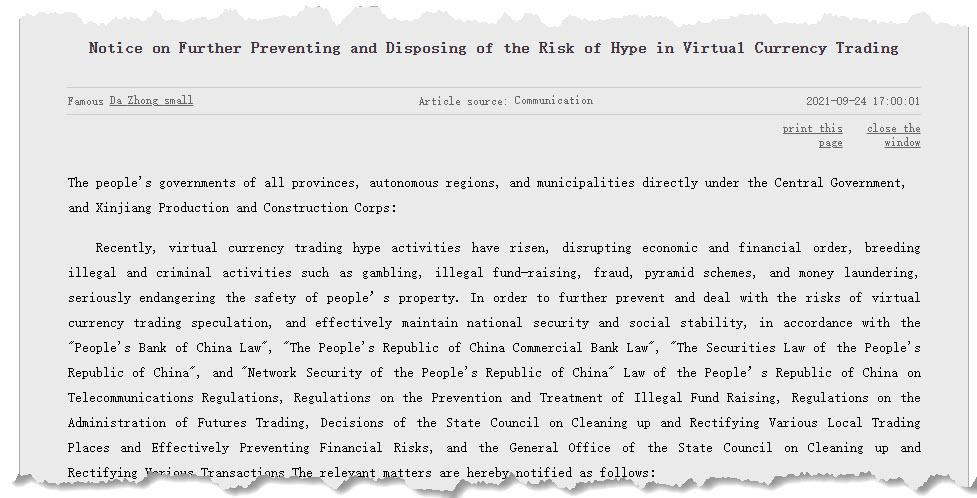 As the article notes, the action comes as part of a concerted campaign under way in Communist China to ban crypto-"currencies":

The statement is the culmination of years of failed crackdowns on cryptos and is nothing new for the authoritarian state. In 2013, the country ordered third-party payment providers to stop using bitcoin. Chinese authorities put a stop to token sales in 2017 and banned crypto exchanges from operating within its borders in 2019 but individuals in the country continued to find ways to trade bitcoin and other digital currencies via over-the-counter or peer-to-peer transactions. More recently, the country banned all crypto mining, which however only prompted miners to shift offshore.

But this ban is more extensive and the reason for it is telling:

Naming bitcoin, ether and tether as examples, the central bank said cryptocurrencies are issued by nonmonetary authorities, use encryption technologies and exist in digital form and should not be circulated and used in the market as currencies. The PBOC specifically targeted overseas cryptocurrency exchanges declaring that it was illegal for them to provide online services to residents in China.

However, I cannot help but think there are much deeper reasons behind the move, and a hint - and it's a whopper doozie of  hint - occurs later in the article:

This latest harsh directive, which sent Bitcoin dropping over 8% on Friday, comes as global markets have grown increasingly concerned over a debt crisis involving property developer China Evergrande Group, and which many speculated would lead to a surge in capital outflows via cryptos that bypass China's great firewall. The Chinese government may also be responding to signs that miners are disguising their activities to stay in business according to Bloomberg.

It was unclear what prompted the latest crackdown, however one theory is that it’s part of a broader law-and-order push ahead of the 100th anniversary of the Chinese Communist Party this year. Another more likely theory is that China is aggressively clearing the runway for its very own digital yuan, a central bank digital currency that’s been in development since 2014, and whose market reception has been catastrophic so far.

The most likely reason behind the crackdown is that Beijing is simply looking to stem capital outflows via stablecoins and cryptocurrencies. As a reminder, tether remains one of the preferred conduits for Chinese resident to launder over $1 trillion in domestic currency abroad. And with turmoil emerging from the Evergrande default and imminent deterioration in the property sector, it is inevitable that Beijing is fearing a new flood of outbound capital transfers will follow so it is taking preemptive steps. (Boldface emphasis added)

There you have it; in essence, the speculation - which I share - is that Communist China is trying to stem an exodus of capital - of liquidity - from the country via crypto currencies in the wake of the Evergrande difficulties, and as part of a crackdown that has been under way in the past few years with the ascendancy of Mr. Xi. In other words, the crackdown is, in part, a possible response to the Evergrande problems. In articles I've seen, Evergrande's junk bonds exposure is anywhere from  $300 to $500 billion, and with such wide variances, I strongly suspect it's much larger, and that its exposure is such to include other large Chinese real estate and investment firms. Then recall that story from about a year ago of Chinese investment firms collateralizing loans with gold, which gold turned out to be gold-plated tungsten bars. And now we have the suggestion that cryptos are somehow connected to the Evergrande problem.

This speculation -- which once again I'm willing to entertain - suggests that some of Evergrande's exposure is precisely in the form of crypto-currencies, and if that be the case, it also suggests that somewhere in the mix, one might be looking at state actors disguised as crypto-traders, waging a liquidity war against that country with cryptos being the vehicle of choice to launder money out of the country.

Interestingly enough, this comes at the time the American Fed is being considered for a vast expansion of its powers in bills before the Congress, bills essentially defining a digital dollar crypto as legal tender.

My bet? We're just seeing the beginning of this story...

41 thoughts on “CHINA: CRYPTO-CURRENCIES ARE ILLEGAL”

Giza Community is a community of speculation, commentary, and opinion on current events, history, humanities, the sciences, and the works of Dr. Joseph P. Farrell.