Last week I talked about the emergence of the biolabs in conjunction with the war in the Ukraine. One individual was so incensed that I dared give some credence to the Russian side of things as well as the Ukrainian,  he basically berated me publicly (after having privately demanded that I answer him privately and explain myself for my offenses). During his public berating, as I recall, I was informed that the biolabs were explained simply as leftover Soviet labs, or something. The story itself, however, was released by Russian Lt. General Igor Kirilov, and is now being denied of course by the Ukraine and the USA:

RUSSIA'S CLAIM ON U.S. AND UKRAINE BIOLABS ‘ABSURD’ AND ‘UNTRUE’: US DEFENSE OFFICIAL

As the story has  gone back and forth between my public "berater" and the propotainment media who give the Russian version no credence, and the alternative media which does, I'm still noticing a number of - what for me at least - are "problems".  Consider the following:

Undersecretary of State for Political Affairs Victoria Nuland told the Senate Foreign Relations Committee Tuesday that the U.S. was aware of "biological research facilities" in Ukraine under questioning from Sen. Marco Rubio, R-Florida.

He asked her if Ukraine has chemical or biological weapons.

"Ukraine has biological research facilities," Nuland replied, "which in fact we are quite concerned Russian troops, Russian forces, may be seeking to gain control of, so we are working with the Ukrainians on how they can prevent any of those research materials from falling into the hands of Russian forces."

She also said that if anyone were to deploy a chemical or biological attack in Ukraine, she "100%" believed it would be the Russians.

Following the collapse of the Soviet Union, the U.S. has led an international effort to secure and dismantle leftover Soviet-era weapons of mass destruction, including in Ukraine. In August 2005, Washington and Kyiv agreed to cooperate to prevent the "proliferation of technology, pathogens and expertise that could be used in the development of biological weapons."

Now, any way one slices it, "biological research facilities" in the hands of governments give me pause, particularly as a narrative seems to be being prepared that Russia will use chemical or biological weapons in the Ukraine, particularly after Victoria "F the EU" Nuland mentions this in the context of "those research materials" falling "into the hands of Russian forces."

Now, wait a minute. I thought the Ukraine's "biological research facilities" were supposedly fairly benign; that certainly is the intent of her words. And besides, the Soviet Union collapsed some time ago, and the 2005 agreement to prevent proliferation of biotechnology related to pathogens and expertise surely was long enough ago that these labs and anything dangerous or potentially dangerous could have been shut down by now.  If all that's fairly benign (it sort of reminds you of the benign non-gain-of-function gain of function research the National Institute of Health was conducting in Wuhan, doesn't it?), then why be the slightest bit concerned that Russian forces would get their hands on it?  Oh, and lookee lookee... apparently the Center for Disease Control was investigating corona viruses in bats in the Ukraine and Georgia (in addition to Wuhan).  Surprise!  Kinda makes one wonder about those biolabs stories associated with Georgia a few years ago. (As an aside, note the involvement of Ukrainian and Georgian scientists in the effort.  It looks to me like the USA decided to put all those ex-Soviet scientists to work, give them a pay check, and gain priceless information about Soviet chemical and bioweapons research. And what a convenient way to create plausible deniability.  "We were just funding it. We had no idea those crazy [Fill in the Blank: Russians, Ukrainians, Georgians] were researching that.") 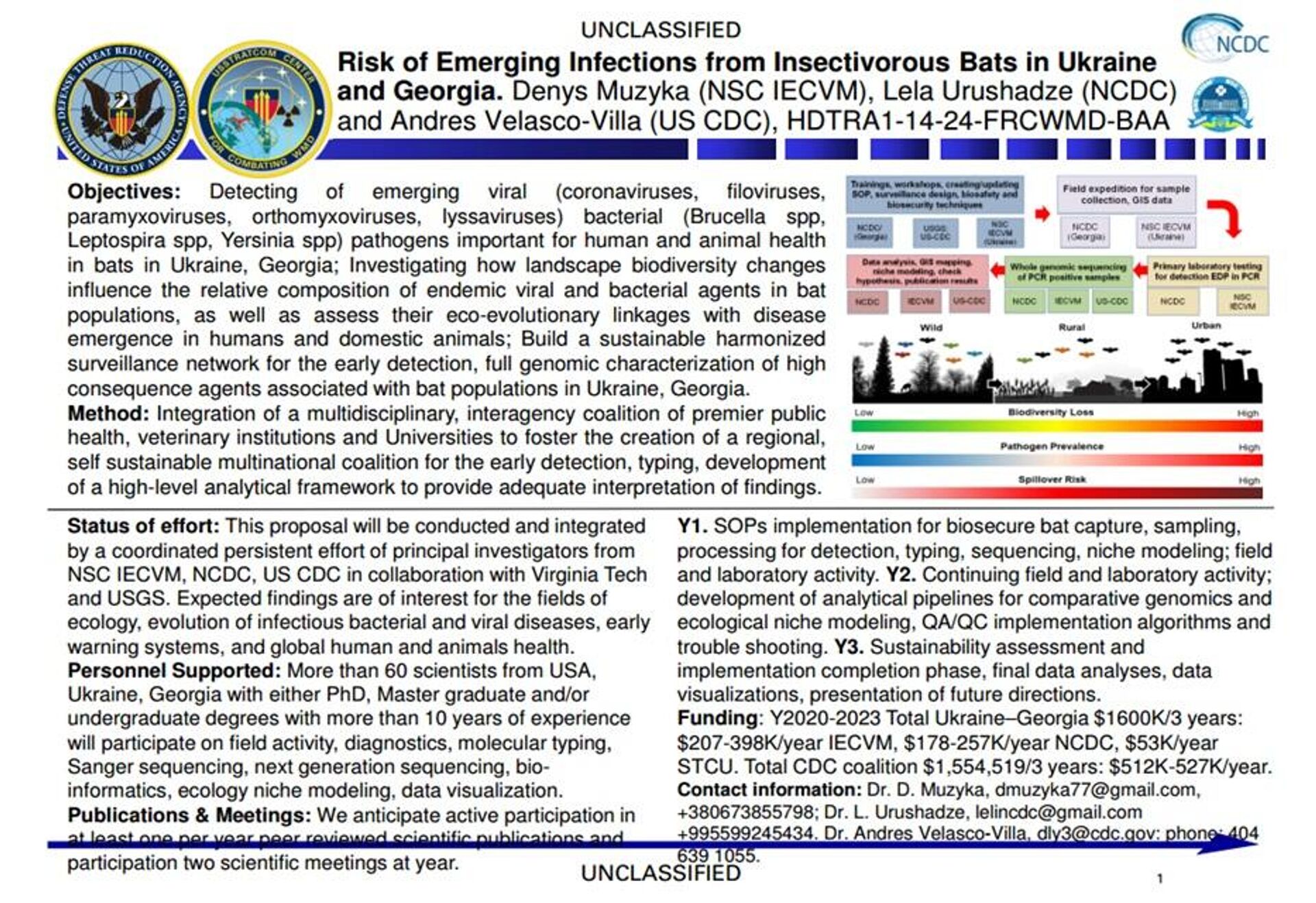 The biolabs trail apparently does not end in the Ukraine either, according to this story shared by L.G.L.R. and currently making the rounds in Australia:

Granted, it's a Telegram post, but one wonders just how deep of a rabbit hole this may be, now that data about preparations for the planscamdemic and evidence of egregious fraud are emerging; one wonders how widespread and interconnected it may all be.

So, yes, my berater can continue to berate me, because nothing he said convinces me, especially given the individual making the claims before the US Senate that she did. Governments - the Russian, the Ukrainian, the Polish, the British, the German - lie.  That's what they do. And this government has a long and practiced history of it, beginning at the very least with JFK's assassination, the most recent example being the injections are "completely safe."

I'm not buying.  There's something very wrong in this story.  It doesn't pass the smell test, and the bad odor I'm afraid is - at least on this score - coming from Kiev and Swampington, not Moscow.