THOSE WEIRD HOLES ON THE FLOOR OF THE ATLANTIC OCEAN

August 5, 2022 / Joseph P. Farrell / Comments Off on THOSE WEIRD HOLES ON THE FLOOR OF THE ATLANTIC OCEAN

Now, you may be wondering why I've filed this story with its unusual headline under the "UFO" tab. Patience, we'll get back to that. But first, the story, which was spotted by many of you and passed along, so we'll go with this version of the story shared by W.G., with our thanks to all of you who sent along different versions:

You can read all the article for yourselves, and see the picture of the alleged holes. But I want to concentrate on both the picture, and the following statement:

The July 23 dive reached depths of 1.7 miles while visiting the summit of an underwater volcano north of the Azores. A remotely operated camera was used to safely record the discoveries.

NOAA posted photos that show the holes were found in what is otherwise a flat sandy surface.

And here's the picture accompanying the article: 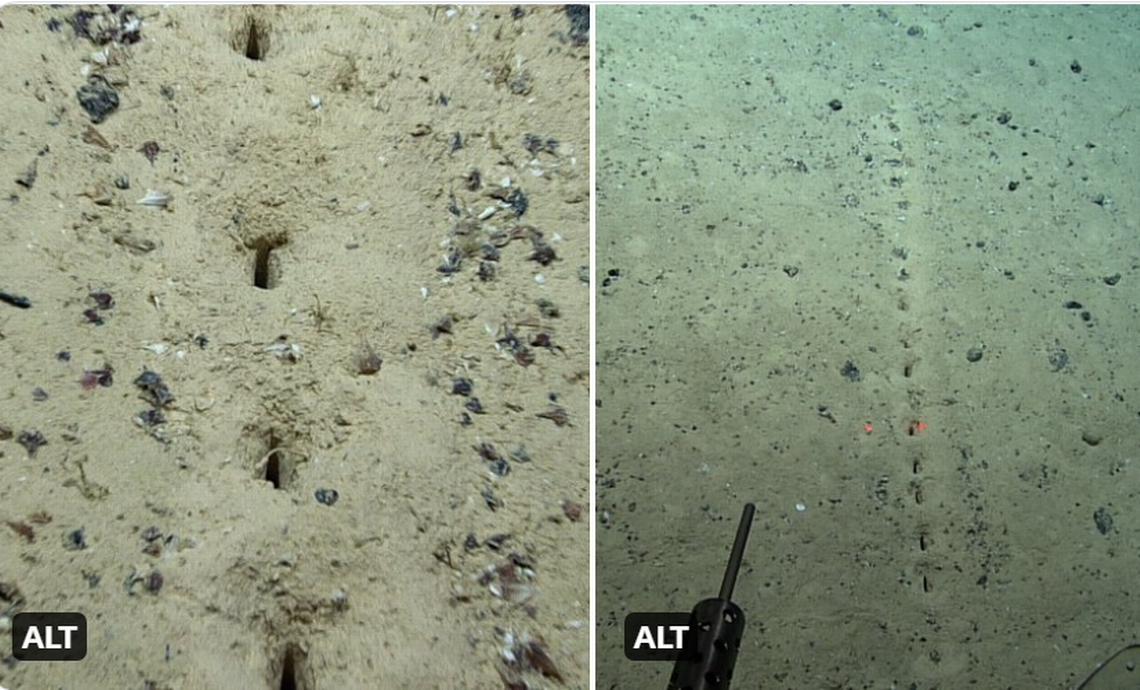 Now I have a small problem with this picture. Assuming it to be the actual picture taken at a depth of 1.7 miles (that's almost the same depth as the wreck of the RMS Olympic...er.... uhhmm... (cough)... the RMS Titanic (see https://www.youtube.com/watch?v=rt0id_LEyIY), and if you've seen those haunting pictures of the wreck, you'll know it's mighty dark down there, and that the artificial light used in the drones taking the pictures casts a strange effect over them.  Now, I'm not saying the pictures here are faked or anything, merely that this effect seems somehow missing from them. There's a hint of artificial illumination in the right hand picture, but it still just does not look the same.

But let's press on and using our usual methodology of assuming the pictures accompanying the article are genuine in order to indulge in our daily high octane speculation, then "What are we looking it?"

Well, I don't now about you, but it appears to me that we're looking at (1) something technological and (2) lying beneath a more or less thin layer of silt on the bottom of the ocean. Regarding the first point, the holes resemble slits, even such as one might find for the intake on a submarine, except if that were the case, we should expect to see many more such rows of holes, and not just one. In short, if this is a technology (which I assume it to be) it does not appear to be very advanced. Perhaps it's some sort of "USO" or "unknown submersible object" (and hence why I placed this under the "UFO" tab.)

In short, we're not looking at holes in the floor of the Atlantic Ocean, but rather, holes in a "something" on the bottom of the Atlantic Ocean. Perhaps a forgotten sunken German u-boat from the war, perhaps a lost Soviet or American submarine, or even a 'something else."  What that "something else" may be is anyone's guess, and how long it's been there would be dependent on the normal rates of silk deposition in that area of the Atlantic, though hazarding a guess at the rather thin "look", not that long. What it is would require some deep water archaeology and thorough consultation with records of lost ships...

... and if the US Navy suddenly shows up, cordons off the area, and attempts to raise the something, and then keeps it from us, then we'll know it was indeed "something."

In the meantime, all we can do is speculate...