A DEMONSTRATION FOR RUSSIA

This is another article that was spotted by E.G., and I have to comment on it, because to my mind it is full of "high octane speculative implications". But first, the article:

Watch: US Drops Experimental 'Parachuted' Missile In Arctic As Warning To Russia

The USSA, according to the article, has been testing a new delivery method for its cruise missiles, literally dropping them from cargo aircraft in crates, and which then in turn drop the cruise missiles on parachutes until the missiles launch themselves at a target:

A US special forces unit has stepped up its operations inside the Arctic Circle in Norway while admitting it is trying to get Russia's attention by testing an experimental new weapons delivery system there.

"It puts this thing within range of Russia," Special Operations Command Europe’s Lt. Col. Lawrence Melnicoff was quoted as saying of the new parachute dropped long-range missile which was tested. "We are intentionally trying to be provocative without being escalatory."

"We’re trying to deter Russian aggression, expansionist behavior, by showing enhanced capabilities of the allies," he added in the comments given to military magazine Stripes.

The experimental weapon system and program is called Rapid Dragon, and on Wednesday it was successfully test-fired at Norway’s Andoya Space Range, which is the country's premiere far-northern weapons testing site.

The article goes on to imply that this rather bizarre delivery system was contrived as a means of "survivability": if the Russians take out conventional military bases or aircraft delivery systems, there is still a system that can be utilized in any standard cargo plane.

... but only up to a point. And it's that point that's making me wonder.  Nuclear and thermonuclear bombs have been being delivered by parachute drops for a long time. For example, Russia's massive 50 megaton plus "Tsar Bomba" was dropped by parachute from a bomber when it was tested, for the simple reason of allowing the crew of the bomber time enough to fly out of lethal range of the blast and fireball of the enormous weapon.  This conjures the possibility that the missiles being dropped have such enormous yields that a parachute is necessary to allow the aircraft time to escape.

But I very much doubt that's the reason.

The other reason is what makes me think that there are more messages going on here than meets the eye, and the message comes not in the text of the article, but in the accompany "artistic rendering of 'rapid dragon' deployment system", showing the crates of missiles floating on parachutes, with the missiles pointing straight down and, in a couple of cases, the actual launch of said missiles.  This "artist's rendition" reminded me of similar "renditions" of the USSA's "Project Thor" Rods of God kinetic impact weapons system: 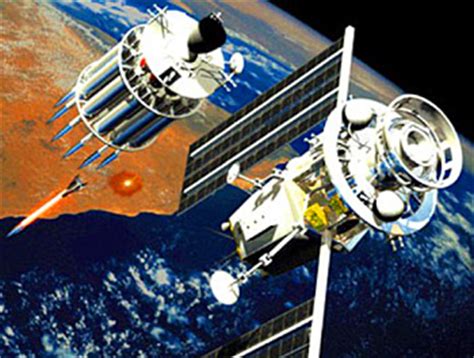 And this strong resemblance makes me wonder if the "Rapid Dragon" system is but a simple "poor man's version" of a kinetic weapons system, or if, alternately, the USSA is sending a subtle message to Russia that an actual satellite based strategic kinetic weapons system was already deployed. My bet is on the latter, because you'll recall that strange remark of an American general during the Trump Administration, in response to a North Korean provocation. The USSA was keeping all options on the table. When a reporter asked - loudly - if those options included kinetic weapons, without much hesitation the general answered "yes."  And one must also remember Trump's own words that the USSA had other weapons besides nuclear that it could use.

I suspect we're looking at them.

And yes, the Russians have them too, because in fact, during the Cold War, they deployed "killer satellites" using anti-satellite kinetic weapons.  All it takes is a considerable scaling up of those kinetic impacters, and one has a strategic weapon of incredible destructive force, with no radioactive fallout.  Additionally, such weapons would be precision weapons, the very sort of thing one would use to take out Don Corleone's Vegas Hideout, while leaving Vegas itself largely unscathed.  It's the perfect weapon, in other words, for decapitation strikes, or for getting rid of pesky Chinese chemical plants in Tianjin.

And in case you haven't noticed, Russia still has large and powerful functional booster rockets capable, perhaps, of putting such systems in orbit.

to put it as succinctly as possible, I think we're watching quiet announcements of the end of the nuclear bomb as the principal (and unusuable) weapon of strategic offense. We're watching the announcement of a new era of similarly destructive, but usable, weapons.