ALCHEMY, LAWSUITS, AND A ROTHSCHILD BANK

You're not going to believe this one, or then again, maybe you will, given all the strange behavior that we've seen from that quintessentially strange group of people we lovingly call the banksters. It comes to us via a regular reader here, Ms. P.H., who was good enough to share it with me in an email. It was, I confess,  not one of those things - at least not initially - that I was going to blog about, for in my review of emails and articles that people send me, I have to scan quickly and then decide what to blog about. As I was scanning this article, nothing leaped out, until my eyes fell upon the word "alchemy," which caused me to sit up, take notice, and decide to ponder this one much more closely and carefully. After all, the occurrence of that word in a context "heiresses" and "countesses" and "Rothschild" and "Lawsuit" does tend to make one stop and entertain some high octane speculation.

So here is the article in question:

Now, for those of you who are wondering what exactly about this article caught my high-octane-speculation-eye, patience, we're getting to that. First, ponder what the Swiss heiress Corinna von Schonau was convinced by an investment advisor at a Rothschild bank to invest in:

"Von Schonau needed financial advice, and she turned to Rothschild Bank executive Baron Wilfrid von Plotho and his wife, whom she knew socially.

"Rothschild Bank is part of a powerful financial empire, an institution that dates back more than 200 years. It counted Queen Victoria among its distinguished clients, and for a long time, it set the daily price of gold.

"Based on Rothschild’s sterling reputation, von Schonau hired von Plotho to manage millions of her Swiss francs. According to the lawsuit, von Plotho convinced her, while she was still grieving over the loss of her mother, to sell a large portion of her Novartis shares because she needed to diversify her holdings. The shares were transferred to Rothschild. Eventually, she would set up six accounts investing in everything from European bonds to high-risk private equity ventures.

"Among those private equity placements was John Preston and Michael Porter’s company, Continuum Energy Technologies in Fall River. It’s a business Preston started in 1999 with Christopher Nagel, an MIT-trained scientist.

"On its website, Continuum describes itself as “a world research leader in electromagnetic tailoring of ordinary materials to develop extraordinary properties.” In other words, it aims to change the properties of matter.

"It may sound like medieval alchemy, but Continuum scientists, including a Nobel Prize winner, published research showing they could magnetize copper. While there is no market for magnetized copper, the experiment showed they could change the properties of elements. For example, Continuum could produce an enhanced copper that could be a better conductor of electricity, a product that would have commercial potential."

It may sound like alchemy, but, the article subtly implies, it really isn't. But then, what exactly are they up to?

Now, before we can answer that, a bit of background is necessary. Regular readers here will know that, from time to time, we cover stories of a technological bent, and one of the areas that we regularly talk about in that respect is matter and the "alchemical" ability to change its properties, or even experiments that create forms of matter only predicted by theory, or experiments that create new states of existing elements. A capability like this, the ability to engineer the properties of material creation itself is drawing very close to the ability to manipulate and engineer the physical medium itself. It is, in this sense, classical alchemy, and very much a secret worth creating and, more importantly, protecting.

Now we get to the meat of the issue, which, for our purposes, is not in the main text, but in one of the pictures accompanying the article: 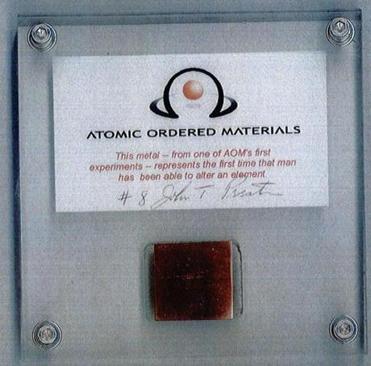 Now the article accompanies this picture with the caption: "The gift von Schonau received from Preston during a visit she made to Continuum, then known as Atomic Ordered Materials," indicating that the company that von Schonau had invested in was once known by the name "Atomic Ordered Materials," which, to my high-octane-speculation" mind, bears a close resemblance to the so-called "official name" for "monatomic elements," namely, the term "Orbitally Rearranged Monatomic Elements,: the name given to the alleged "white powder" totally-consumed form of certain heavy metals in the platinum group, and also given to the totally-consumed form of gold, long a preoccupation of the Rothschild banking interest.

So permit me to indulge my usual high-octane-speculation a bit father. I have been suggesting for quite some time the radical hypothesis that (1) there is a hidden system of finance established after WW2 (2) this was based on Axis plunder, in particular, "Yamashita's gold" from the Japanese Operation Golden Lily (3) this gold was kept off the books was moreover was rehypothecated several times over (4) the official "guesstimates" of the amount of gold in the world is probably less than the actual amount in existence, which may be as much as an order of magnitude greater (5) I have documented in some books the interwar fascination with alchemical processes, some of which were actually patented by Siemens and other firms in Germany between the World Wars, and finally (6) that someone may actually be making gold, or, stretching the amount by a variety of means (I blogged, for example, about one such process on this site within the last year, a process reported by phys.org and involving the synthesis of gold and milk protein...yes you read that correctly).

In other words, I have entertained the suspicion that some of the banksters were deeply involved in sponsoring a materials engineering of a very unusual sort.

It would seem that, to a certain extent, the Boston Globe has come across a story that might tend to corroborate some of those high octane speculations.