HAVING FUN AT A SOCCER GAME: THE BRICSA AGENDA EMERGES

Now, while the world cup soccer finals were going on - which Germany eventually won - the nations of the BRICSA bloc were busy talking to each other, and one of them, Mr. Putin, was talking with Mama Merkel. I was not able to comment on all of this at the time, having had to pre-schedule over a month of blogs due to the Secret Space Program conference (we'll get back into orbit again this week, eventually, so be patient). 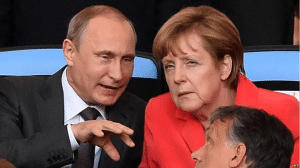 Now, what do you want to bet that they are not talking about soccer? Interestingly, while Putin and Merkel were at the World Cup, along with Brazilian President Dilma Rouseff, and her counterpart, Christina de Kirchner of Argentina, President Obama was not. One might wonder at the convenience of the finalists of the world cup being Germany and Argentina, for the latter wants into the BRICSA bloc, and the former has close trading ties with its two biggest members, Russia and China, and is also "less than happy" about American spying and other "activity."

What a wonderful time for soccer fans to get together and "talk shop." (Advice to  Washington DC policy makers: start promoting soccer so you can be invited too.)

So, what actually was the BRICSA summit-in-the-guise-of-a-soccer-final up to? Well, look at this:

That's right, they were discussing the details of the launch of the BRICSA development bank(as reported in the above article from soccer-playing India). But I hope you caught some very significant statements. First, note this significant paragraph:

"After two years of intense negotiation, the BRICS leaders finally launched the New Development Bank on July 15 at the Sixth BRICS Summit in Fortaleza, Brazil. The bank’s focus will be on infrastructure and sustainable development projects through loans, guarantees, credits and equity investments. The decision to share the initial subscribed capital of $50 billion and the resulting voting rights equally, reflects a commitment by the five countries to view each other with equity."

For those who have been following the analysis of former HUD Assistant Secretary Catherine Austin Fitts, this will sound very familiar, for she has been maintaining that there appears to be a movement afoot within the rarefied atmosphere of international and high finance to move to an equity-based system, and now the BRICSA bloc has indicated that this is precisely one component of their thinking.

But note these two highly significant paragraphs as well:

"In its most basic form, this architecture would need three components, one each to support trade, settlements and investments in the local currencies of the five countries– rupees, rouble, renminbi, rial, rand.

"1. A mechanism that enables trade in local currencies. Since none of the five currencies are global reserve tender, the respective central banks will have to make their currencies available to the group. Article 24 of the BRICS bank does provide for financing of projects in local currencies. However, for enabling trade, the bank will have to enable currency swaps between the central banks or activate the Multilateral Agreement on Extending Credit in Local Currencies signed at the 4th BRICS Summit in New Delhi in 2012.

"China has been experimenting with such swaps bilaterally to push for greater use of the renminbi. It has swaps with 21 countries including Russia and Brazil, denominated in renminbi worth up to RMB 2,600 billion ($420 billion) and is encouraging partner countries to pay for their imports from China in renminbi. Brazil has been experimenting with conducting trade with Argentina in rial and pesos through an agreement inked in 2008."

Now this is absolutely unique, and I hope you caught the significance, for the architecture being created is a multipolar currency world, with not one reserve currency within the bloc, but rather, several, which is a model that is more or less unique in international finance for the last five hundred years. As the article itself notes, the members countries of the bloc agree to "treat each other with equity," i.e., not only on the basis of equal partners but precisely on the basis of equity, a clear philosophical blow at the premise underpinning the system of unipolar finance capital and the central banking model that dominates Western finance, with the heavy hand coming, of course, from Washington and the US Federal Reserve and the sister western central banks such as the Bank of England.

That this new form of financial architecture is deliberate is reinforced by the other two components:

"2. A mechanism for settling local currencies. Since trade payments will be made in five local currencies, a new settlement system will have to be created, as dollar-based transactions are ultimately cleared by the Federal Reserve of the U.S. There are no provisions in the bank for this yet but there are two models that can be built on – Asian Clearing Union and RMB Trade Settlement Scheme."

"3. A mechanism to invest ‘surplus’ local currencies. Since trade is not perfectly balanced between the BRICS, it is likely that some countries will be left with the surplus currency of another country even after payments have been cleared through the clearing union. For instance, India has a $36 billion annual trade deficit with China. Even if 50% of it were settled through the clearing union, China will still be left with, $18 billion worth of rupees. This surplus can be settled in dollars, as ACU currency does with surpluses left over from trade between its members.

An alternative strategy would be for India to have China hold rupees in an interest-bearing financial product such as government securities or corporate bonds in India. This will enable the rupees to be re-invested into the Indian economy.(Italicized emphasis added, boldface emphasis in the original)

That India, and one can only presume Brazil, South Africa, and, should it (probably) eventually join, Argentina, would favor this multi-polar architecture is indicated by the conclusion of the article:

"China can build the alternate architecture just by itself and for itself. If that happens, a renminbi-based geoeconomic architecture could be as unfair as the existing dollar-based architecture – so it is even more important to build a multilateral architecture.

"The only way to ensure that each country’s interest is protected is through smart economic diplomacy. Otherwise, the larger financial eco-system will not be willing to join this experiment with the BRICS bank."

In other words, for the BRICSA bloc to really work, the smaller economic powers involved (and India is not that small, remember, it recently overtook Japan as the world's third largest economy) will want to avoid erecting another global reserve currency like the US dollar. Eventually, that might happen anyway, but do not look for it in the interim.

So what were Putin and Merkel talking about? Well, recall that Germany just recently allowed bonds denominated in Chinese yuan to be traded on the Frankfurt bourse. Chances are, then, that they were talking - off the record and informally of course - about similar bilateral currency agreements. And, given what we blogged about yesterday about fines being imposed on BNP Paribas, Commerzbank, and Deutsche Bank, those bilateral currency agreements between the BRICSA bloc and France and Germany are going to have a growing appeal to certain factions within those countries. In essence, over time, they could become de facto members of that bloc. Over time this also means that the BRICSA bloc could have a growing appeal to other economically hard pressed members of the European Union, specifically, Spain and Italy, the other major continental powers.

(My thanks to Ms. M.W., a regular reader here, for sharing today's important articles with us.)