Now, normally I don't bother people with reading tea leaves of this sort, but today, I have to, because this one is so strange, and appears within days of other strange space news, that one begins to wonder. The tea leaves in question, which remain to be read, were sent by so many of you it isn't funny. It's safe to say, that this little story merited some of the highest numbers of people sending it to me as an article as I've seen in the nearly six years, now, since we upgraded this website. The tea leaves in question are NASA's new space station mission poster, and this one, it seems, is either an exercise in deliberate humor, or messages are being sent, or perhaps, a bit of both. Here's the article:

Now, as one Mr. K.C. noticed, the composition of this poster has a particular allusion to a well-known Renaissance painting, the School of Athens: 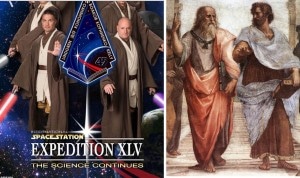 Putting such a composition into the picture where the astronauts and cosmonauts are dressed like the Jedi knights from Star Wars does suggest not only a cosmic conflict, but a cosmological one, with Plato, of course, emphasizing the incorporal universals, and Aristotle the material, corporeal particulars. Interesting, too, this, in the context of Jedi knights and "the Force," George Lucas' thinly disguised version of the Egyptian Ma'at, able to do duty(some would argue) in both poles of the Plato-Aristotle dialectic. So what's the message - if any - here? We've found something cosmologically significant, and it's in space, and humanity gets to play interplanetary space policemen, the visible manifestation of Ma'at in the local celestial neighborhod, enforcing order? Well, in the light of yesterday's blog about Mr. Medvedev's curious television remarks, one wonders.... indeed, why do we need interplanetary policemen at all? Oh yea... they're nice to have around if you're busily promoting space commercialization... which might invite thieves, robbers, and pirates, in which case, who are the thieves, robbers, and pirates?...and we're back to square one.

But then there's the poster itself, which, when I saw it, raised my eyebrows even more, and most of the people that sent me the article, noticed the same things as well... First, theres the elements of the poster: (1) the astronauts/cosmonauts, (2) dressed as Jedi knights with light sabers, (3) a launching Russian booster, (4) which happens to be launching right next to an image of the Star Wars "Death star," (5) Planet Earth, (6) on the left side, upper left corner, some sort of spacecraft, which looks like an orbital telescope, (7) at the top, the international space station itself, and beneath that, a picture of the Planet Mars.

Now, so far, there are three prominent war/conflict references going on: the cosmonaut-Jedis, the Death Star, and the Planet Mars. Then there's the little blue deltoid logo in the center... the "patch" one may assume, with its own allusions to Mars...

Now, as if this isn't enough for our high octane speculations (don't forget yesterday's little replay of Medvedev), we now have this:

It is interesting that when President Bill Clinton assumed office, one of the first things he did was to order his confidant Webster Hubble to look into the UFO issue (and Area 51 as well), and that now, Podesta, with his UFO interest, is working in Hillary's presidential campaign.

So what's going on? We'll, here's my high octane speculation of the day... (It's so high octane that it's not safe to drive with this stuff in the tank): behind and above all the geopolitical wrangles on Earth, something else is going on concerning space, particularly when you look at who the two biggest contestants in the planetary geopolitical dance are: Russia, and the USA. Russia has been giving some rather interesting demonstrations lately, think of the USS Donald Cook, or more recently of the Ukrainian missile that "broke up" in flight, ostensibly due to a malfunction of an old part. Then again, Mr. Rogozin of Russia's space and military air defense also made recent remarks to the effect that Russia knew how to penetrate America's missile defences. And of course, there's the Ukraine. But behind all of this is a NASA poster with Soyuz space capsule blasting off on a Russian booster, with astronauts and cosmonauts wearing Jedi knight costumes, flying past the Death Star, with Mars in the background, and Mr. Medvedev wants the US to talk about ETs, or "we will," and Mr. Podesta regrets no disclosing (or is that really not being able to find the UFO secrets to disclose?)... Any way one slices it, there appears to be a deep story in the background here... and the story concerns "them"... Funny too, that Mr. Medvedev would urge the USA to make disclosure at a time when its moral stock, and worldwide opinion of its trustworthiness is so low, while Mr. Putin's, correspondingly, is rather higher...

See you on the flip side