In a week which has seen a surfeit of very bizarre news, from NASA's plans to "vent the pressure" from the Yellowstone caldera by "drilling" into it ("from whence, and with what?" one might ask), to revelations about "volcano derivatives already having been taken out against the event, to Harvey's weird behavior, you can add the story of the fly-by of the asteroid "Florence" to the list, and in this case, there's a little fuel for our high octane speculation mill as well, which many readers contributed to by sending various versions of the story.

First, the "bland, nothing to see here, move along" version of the story, complete with the usual animations to make us feel better about the "asteroid apocalypse":

But then there's this much shorter version of the story, which raises many more questions and speculations than it provides "good feelings", especially in a week that has seen NASA talking about tinkering with super volcanoes:

The picture here is what intrigues me, plus a little statement made in the article itself. For another picture of Florence, try this image from the UK's Daily Mail, here: 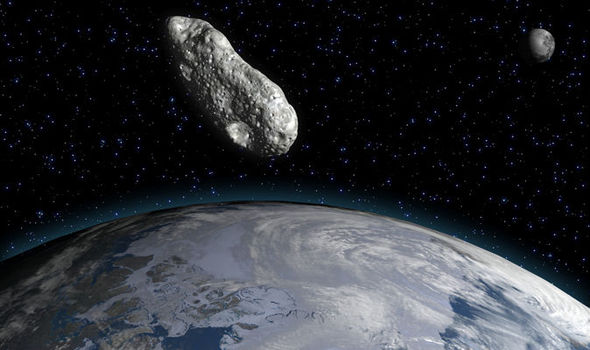 I don't know about you, but there is a "regularity" of features on this rock, plus its unusual lozenge-shape, that make me suspect that many out there will entertain that some aspects of the object are artificial in nature. It has that "Arthur C. Clarke-Rama" look to it. And I readily admit, that when I saw the picture in the second article linked above, my first thought was "Whoa!..."

But what really grabbed my attention in this otherwise bland "asteroid-flys-near-Earth-nothing-to-be-worried-about" story was this little statement that appears, more or less, out of nowhere, right at the end of the second, very short, article:

Nasa is due to test options for a planetary defence system in the event an asteroid comes onto a collision course with the planet.

Oh really! (Can you say, "Rosin Affidavit"?)
Is this to imply that the little asteroid was a target of such a system? And in fact, while we're at it, how will NASA test such a system? Will it target an asteroid? How will we know if such a test has been conducted and was successful or not? Will we even be told?
And let's not forget that story earlier this week about "venting pressure" from Yellowstone by "drilling into it," a technique, you'll recall, that NASA admitted might actually cause an eruption if said drilling were to occur straight down into the caldera, raising the question of why "straight down" should matter: a pin will burst a tightly filled balloon no matter what the vector of the pin-prick is. "Straight down" conjures all sorts of images, from drilling rigs to space-based kinetic weapons like a rail gun and so on, which, gee, might even be used to "test defense capabilities" against an asteroid, which looks (as I said) like an Arthur C Clarke-Rama fantasia come home to roost. (And since it's so close, and since we're indulging in a lot of speculation here, why not crank up one of those hidden technologies and go out there and have a look at it, before deciding to "test a planetary defense system in the event an asteroid comes onto a collision course with the planet."
In any case, the asteroid apocalypse didn't happen (otherwise this blog wouldn't be appearing), nor, as far as I know, was a test conducted. But the timing of the stories does leave one to wonder...
See you on the flip side...
Posted in Cosmic War